The composition of a natural herd

In general, animals live solitary or in groups. The lifestyle of an animal species depends on their survival and reproduction strategy. Solitary animals live alone and only have contact with peers for reproduction. For example, tigers and other felines live this way. Other animals have a social existence and form groups with peers. Horses are such social animals and live in herds or groups.

Horses don’t just form herds, they do this because it has certain advantages for them. This has everything to do with the two main goals in a horse’s life: survival and reproduction. In addition to being a herd animal, the horse is also a prey animal. That means they have to constantly be on the lookout for predators, otherwise their life could be in danger. A herd makes survival a little easier. Firstly, the more eyes and ears on the lookout, the better. As a result, a predator may not only be spotted faster, but it also ensures that a horse can rest and sleep safely. Another advantage is that it is difficult for a predator to focus and catch an individual if a herd (which stays close together) is on the run. In terms of reproduction, a herd provides opportunities unrelated to territory. A horse travels a lot to find food. In a herd, it is possible to reproduce while migrating. There are also disadvantages to living in a herd. For example, there can be competition for food and diseases or infections can break out more easily.

But what does such a herd of horses actually look like? Horses live in two types of groups: a harem (family group) or a bachelor group. Within these groups there is a certain social order and hierarchy. A harem consists of an adult stallion, mares and young offspring such as foals and yearlings. The stallion is mainly concerned with herding and keeping the mares together. That’s why the stallion is usually at the back of the group, to keep everyone together. The stallion also defends his harem against other stallions so that his mares will not be stolen away. It is possible that a second adult stallion lives in the harem, also called a ‘second’. This is a kind of assistant stallion that helps the harem stallion in defending the mares. But the harem stallion is not the leader of the group, this is the job of a mare. The lead mare is called an alpha mare, she leads the way and ensures the social order within the group. This is often the oldest mare in the harem, because she has the most experience in the habitat. It doesn’t have to mean that the alpha mare controls every activity of the group. It is also possible that another horse starts an activity and the rest of the group follows, for example in grazing, resting or fleeing.

As soon as young stallions start to pose a threat to the harem stallion, they are driven out of the group. These stallions then join a bachelor group. Such a bachelor group only consists of stallions, who are preparing to form their own harem. When a stallion wants to form his own harem, he will try to conquer mares from existing harems. During such a conquest, quite fierce battles can take place between the bachelor stallion and the harem stallion.

The size and composition of a herd of horses can vary a lot. If there is a large herd of horses somewhere, you will see that several, smaller groups (harems or bachelor groups) are formed. The average size of these groups can range from three to more than 12 individuals, depending on the amount of water and food in the area. Naturally a harem will not consist of more than 20 horses. 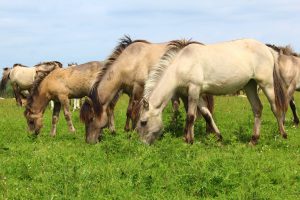 Learn all about horse and behaviour

We use cookies on our website to give you the most relevant experience by remembering your preferences and repeat visits. By clicking “Accept All”, you consent to the use of ALL the cookies. However, you may visit "Cookie Settings" to provide a controlled consent.
Cookie SettingsAccept All
Manage consent

This website uses cookies to improve your experience while you navigate through the website. Out of these, the cookies that are categorized as necessary are stored on your browser as they are essential for the working of basic functionalities of the website. We also use third-party cookies that help us analyze and understand how you use this website. These cookies will be stored in your browser only with your consent. You also have the option to opt-out of these cookies. But opting out of some of these cookies may affect your browsing experience.
SAVE & ACCEPT